Ray Bradbury, Science Fiction master and author of Fahrenheit 451, died Tuesday night at the age of 91.

The world has lost a prophetic voice. RIP
Posted by fahrenheit451moderator at Wednesday, June 06, 2012 No comments:

Each year a Canadian author is awarded the Writers' Union of Canada's 2012 Freedom to Read Award. This year's recipient is Lawrence Hill who was honoured because of "his reasoned and eloquent response to the threat to burn his novel The Book of Negroes," according to Greg Hollingshead, chair of the Writers Union.

The full story was covered in a past entry about Lawrence Hill. A Dutch group called Foundation Honor and Restore Victims of Slavery in Suriname had planned to burn Hill's book to protest the use of the word "negro" in the title. Ironically, the Book of Negroes' title comes from an actual historical document which recorded the names of 3,000 African slaves who were moved from New York to Nova Scotia, then to Africa.

It is not the first time the title has stirred controversy. The Book of Negroes was called Someone Knows My Name in the US and Australia, while in Quebec, it was given the name of the main character and titled Aminata.
Posted by fahrenheit451moderator at Friday, February 24, 2012 No comments: 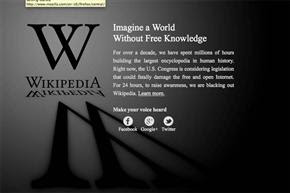 Why is Wikipedia blacked-out?
Wikipedia is protesting against SOPA and PIPA by blacking out the English Wikipedia for 24 hours, beginning at midnight January 18, Eastern Time. Readers who come to English Wikipedia during the blackout will not be able to read the encyclopedia. Instead, you will see messages intended to raise awareness about SOPA and PIPA, encouraging you to share your views with your representatives, and with each other on social media.

What are SOPA and PIPA?
SOPA and PIPA represent two bills in the United States House of Representatives and the United States Senate respectively. SOPA is short for the "Stop Online Piracy Act," and PIPA is an acronym for the "Protect IP Act." ("IP" stands for "intellectual property.") In short, these bills are efforts to stop copyright infringement committed by foreign web sites, but, in our opinion, they do so in a way that actually infringes free expression while harming the Internet. Detailed information about these bills can be found in the Stop Online Piracy Act and PROTECT IP Act articles on Wikipedia, which are available during the blackout. GovTrack lets you follow both bills through the legislative process: SOPA on this page, and PIPA on this one. The Electronic Frontier Foundation, a non-profit organization dedicated to advocating for the public interest in the digital realm, has summarized why these bills are simply unacceptable in a world that values an open, secure, and free Internet.

Why is the blackout happening?
Wikipedians have chosen to black out the English Wikipedia for the first time ever, because we are concerned that SOPA and PIPA will severely inhibit people's access to online information. This is not a problem that will solely affect people in the United States: it will affect everyone around the world.

Why? SOPA and PIPA are badly drafted legislation that won't be effective at their stated goal (to stop copyright infringement), and will cause serious damage to the free and open Internet. They put the burden on website owners to police user-contributed material and call for the unnecessary blocking of entire sites. Small sites won't have sufficient resources to defend themselves. Big media companies may seek to cut off funding sources for their foreign competitors, even if copyright isn't being infringed. Foreign sites will be blacklisted, which means they won't show up in major search engines. And, SOPA and PIPA build a framework for future restrictions and suppression.

Does this mean that Wikipedia itself is violating copyright laws, or hosting pirated content?
No, not at all. Some supporters of SOPA and PIPA characterize everyone who opposes them as cavalier about copyright, but that is not accurate. Wikipedians are knowledgeable about copyright and vigilant in protecting against violations: Wikipedians spend thousands of hours every week reviewing and removing infringing content. We are careful about it because our mission is to share knowledge freely. To that end, all Wikipedians release their contributions under a free license, and all the material we offer is freely licensed. Free licenses are incompatible with copyright infringement, and so infringement is not tolerated.

Isn't SOPA dead? Wasn't the bill shelved, and didn't the White House declare that it won't sign anything that resembles the current bill?

No, neither SOPA nor PIPA is dead. On January 17th, SOPA's sponsor said the bill will be discussed in early February. There are signs PIPA may be debated on the Senate floor next week. Moreover, SOPA and PIPA are just indicators of a much broader problem. In many jurisdictions around the world, we're seeing the development of legislation that prioritizes overly-broad copyright enforcement laws, laws promoted by power players, over the preservation of individual civil liberties.

How could SOPA and PIPA hurt Wikipedia?
SOPA and PIPA are a threat to Wikipedia in many ways. For example, in its current form, SOPA would require Wikipedia to actively monitor every site we link to, to ensure it doesn't host infringing content. Any link to an infringing site could put us in jeopardy of being forced offline.

I live in the United States. What's the best way for me to help?
The most effective action you can take is to call your representatives and tell them you oppose SOPA and PIPA, and any similar legislation. Type your zipcode in the locator box to find your representatives' contact information. Text-based communication is okay, but phone calls have the most impact.

I don't live in the United States. How can I help?
Contact your local State Department, Ministry of Foreign Affairs, or similar branch of government. Tell them you oppose SOPA and PIPA, and any similar legislation. SOPA and PIPA will affect sites outside of the United States, and actions to sites inside the United States (like Wikipedia) will also affect non-American readers -- like you. Calling your own government will also let them know you don't want them to create their own bad anti-Internet legislation.
Is it still possible to access Wikipedia in any way?
Yes. During the blackout, Wikipedia is accessible on mobile devices and smart phones. You can also view Wikipedia normally by disabling JavaScript in your browser, as explained on this Technical FAQ page. Our purpose here isn't to make it completely impossible for people to read Wikipedia, and it's okay for you to circumvent the blackout. We just want to make sure you see our message.

I keep hearing that this is a fight between Hollywood and Silicon Valley. Is that true?
No. Some people are characterizing it that way, probably in an effort to imply all the participants are motivated by commercial self-interest. But it's obviously not that simple. The proof of that is Wikipedia's involvement. Wikipedia has no financial self-interest at play here: we do not benefit from copyright infringement, nor are we trying to monetize traffic or sell ads. We are protesting to raise awareness about SOPA and PIPA solely because we think they will hurt the Internet, and your ability to access information online. We are doing this for you, because we're on your side.

In carrying out this protest, is Wikipedia abandoning neutrality?
We hope you continue to trust Wikipedia to be a neutral information source. We are staging this blackout because (as Wikimedia Foundation Trustee Kat Walsh said recently), although Wikipedia’s articles are neutral, its existence is not. For over a decade, Wikipedians have spent millions of hours building the largest encyclopedia in human history. Wikipedia is a tremendously useful resource, and its existence depends upon a free, open and uncensored Internet. SOPA and PIPA (and other similar laws under discussion inside and outside the United States) will hurt you, because they will make it impossible for sites you enjoy, and benefit from, to continue to exist. That's why we're doing this.

I have a question that isn't answered here, or, I would like to send feedback to Wikipedia.
You can reach Wikipedia editors at info-en(at)wikimedia(dot)org. If you need a response, please be patient: we may have trouble keeping up with the mail.

What can I read to get more information?
Try these links:
Wikipedia's articles on SOPA and PIPA
Statement from Wikipedia editors announcing decision to black out
Wikimedia Foundation press release
Blog post from Wikimedia Foundation Executive Director Sue Gardner
Electronic Frontier Foundation blog post on the problems with SOPA/PIPA

As of 6AM PT, January 18, Google has more than 4,600 articles about the blackout. Here are a few:
Why is Wikipedia staging a blackout and what is SOPA?, from the National Post
Wikipedia joins blackout protest at US anti-piracy moves, from the British Broadcasting Corporation
Wikipedia blackout over US anti-piracy bills and FEATURE: Websites blackout over 'SOPA censorship', from Al Jazeera
Wikipedia, Craigslist, other sites go black in SOPA protest, from the Los Angeles Times
Google Rallies Opposition to Murdoch-Backed Anti-Piracy Bill, from BusinessWeek
SOPA protest: The Net strikes back, from Politico
Wikipedia blackout a 'gimmick', MPAA boss claims, from the Guardian
Wikipedia 24-hour blackout: a reader and Why we're taking Wikipedia down for a day, from the New Statesman
Internet-wide protests against SOPA/PIPA are kicking up a storm, by the Hindustan Times
SOPA, PIPA: What you need to know, from CBS News
Protest on Web Uses Shutdown to Take On Two Piracy Bills, from the New York Times
Protesting SOPA: how to make your voice heard, from Ars Technica
Why We've Censored Wired.com, from Wired
Posted by fahrenheit451moderator at Wednesday, January 18, 2012 No comments:

Thanks to Amy, my counterpart at Fort Erie Public Library, who forwarded a link for The First Banned Books Video Calendar. Says Amy, "For years and years Finland had the highest literacy rate in the world, largely due to the fact that 99+ % of Finns were Lutherans, and the Lutherans made sure all children could read, so they could read Luther's catechism."

The Entresse Library in Espoo, Finland and FAIFE (IFLA Committee on Freedom of Access to Information and Freedom of Expression) have partnered to create this resource.

Following the tradition of the Advent calendar, each day between December 1st and December 24th a new window will open and a new book will be presented on several sites throughout the world.

Posted by fahrenheit451moderator at Monday, December 05, 2011 No comments:

In a move to protect the author Charles Dickens from scandal, author Carl Roberts' "This Side Idolatry" was removed from the public library in Portsmouth, the birthplace of Dickens. Dickens was born in Portsmouth in 1812. The book was a novel but painted Dickens in a bad light, describing Dickens as a hypocrite, philanderer, selfish, an egoist, vulgar, morose, and avaricious, caricaturing his friends in his books behind their backs. So, in 1928, Portsmouth Central Library banned the book out of sensitivity to the legacy of its famous author.

Of the reinstatement, Dom Kippin, literature officer believes that Dickens would agree that it is time to put the novel back on the shelf.
Posted by fahrenheit451moderator at Wednesday, November 02, 2011 No comments:

Banned Books Week in the United States begins tomorrow and runs until October 1. For more information visit the Banned Books Week website.
Posted by fahrenheit451moderator at Friday, September 23, 2011 No comments:

Thank you for your participation in the Banned Book Challenge for 2011.  41 people registered with a goal of 443 books. While this specific challenge is over, feel free to read banned and challenged books. Find lists on the sidebar or through our LibraryThing account.
Posted by fahrenheit451moderator at Wednesday, August 17, 2011 4 comments:

Banned or Challenged Books in the Pelham Public Library

Links to Librarians and Other Book Lovers

Anonymous Blogging with Wordpress and Tor